“There were genuine gasps of amazement and spontaneous applause when they described how a report which would previously have taken six weeks to produce was now the work of a few seconds”.

This is how Karen Bell, the British High Commissioner to Vanuatu described the impact of data science work done by staff at the Vanuatu National Statistics Office (VNSO). Our mentorship model has helped countries including Vanuatu and Rwanda to deliver data science projects with significant impact and created a flourishing sustainable ecosystem of data scientists.

Why mentorship programmes are in demand

Our goal of building sustainable data science communities in developing countries, where resources are often limited, is a challenge. The Office for National Statistics (ONS) and Foreign, Commonwealth and Development Office (FCDO) data science hub has been delivering mentorship and coaching as a technique for supporting partner countries in achieving this goal.

Within international development there are many examples of ingenious and innovative data science projects. However, these projects are often driven, on a technical basis, by wealthier countries rather than the partner countries they work with. This can have several undesirable consequences:

These consequences are summarised by the old adage: “If you give a man a fish, you feed him for a day. If you teach a man to fish, you feed him for a lifetime.” If we work with partners to develop their own skills, they can deliver the projects they prioritise themselves and maintain them internally. Many partner countries have voiced a desire for this and mentorship can help meet this need.

Training programmes are effective when many individuals need to learn exactly the same thing. Training allows us to work “broadly”, building fundamental skills for many. Meanwhile, our mentoring is focused on carefully selected mentees and their specific work objectives. What we teach is more directly relevant to their needs, but also dependent on the mentee using their own expertise to apply what they are learning.

Usually, our training takes place with a group over a concentrated time period such as one week. During this time the staff are not working towards their everyday objectives, instead they are dedicated to training. Mentorship is distinct from this but complements it.

The mentor and mentee agree in advance a goal for the project and the mentee’s expected time commitment. Apart from that, the mentee has the flexibility to continue the rest of their day job. For example, they may meet once a week and the mentee will devote half a day a week to the project.

There are many benefits to the longer-running flexibility of a mentoring project. For example, the mentee can meet and check their code, quality assure it, troubleshoot any problems they have, and receive effective project management support. In these types of coding projects, the majority of the code is written by the mentee, as they are designed to be development projects.

Our mentoring projects work in an agile way. We can pause the project and restart it at an agreed time. For example, if a mentee is pulled on to urgent work, they can meet their mentor, place the work in a position where it can be easily resumed, and agree a time to check in when they can return to the project.

Mentoring complements training best by bridging what has been taught and addressing practical needs. The deeper focus of mentoring is more resource-intensive than training, so the mentees and project need to be carefully selected with clear expectations established.

For example, one project in Rwanda focused on developing a dashboard. The dashboard was used in census monitoring, and the opportunity gave the mentee valuable experience of the statistical programming language R, dashboards, and project delivery.

Similarly, in the Vanuatu National Statistics Office, our mentees have built a Reproducible Analytical Pipeline that reduces the time taken to produce the monthly trade statistics report from six weeks to less than one. The mentees also learned important data science skills that can be applied across projects.

A critical part of a project is a mentorship agreement signed by both the mentor, the mentee, and their line managers. The agreement clarifies the project goals, expected timelines (which of course are flexible) and contact details.

Here is an example of the expectations set out in an agreement:

Passion, drive, and curiosity are more important to making the projects work than coding skills; we can teach you how to code and how to manage your projects. All of our successful mentee relationships have been driven by enthusiastic, clever, and motivated individuals.

Figure 1 shows our process for creating and monitoring a mentoring project. These processes ensure that each mentoring project aligns to the needs of the mentee’s organisation and are flexible to these needs. For example, in our mentoring programme with the Vanuatu National Statistics Office, our original project had weekly (early or late because of the time difference!) meetings providing basic data science training that three mentees applied to the trade statistics reporting.

Our mentoring projects mimic our own project delivery. We meet with stakeholders to understand and articulate their needs. We then agree a timeframe for delivery of a first prototype addressing these needs, and then meet regularly to check in and discuss any unexpected challenges. An agile approach is critical for data science, but it is a cultural shift many institutions need support to embrace.

Project scoping and deciding on what project to work on is an important part of mentorship. Often data science is presented as either a solution to all problems, or something that is too complex and difficult to use and apply. In reality, data science can deliver significant time savings on existing routine tasks, freeing up capacity to deliver new outputs and insights of use to the organisation.

Successful projects have a couple of features in common; they have a clear stakeholder and they fit into the goals and mission of the organisation by clearly articulating who will use it, and what for.

Our projects, and our mentees’ projects, usually fall into one of two categories:

Often referred to as Reproducible Analytical Pipelines (RAP), projects in this category will map out an existing workflow and look for efficiency gains. For example, automating an often-repeated task and/or streamlining a report generation process. These projects are usually very high impact; the resulting time and capacity gained can then be dedicated to training, mentorship, user engagement, or other projects. We encourage reinvestment of resources to promote the sustainable development of a data science community.

These projects meet the goals of the institute that there was no capacity to deliver previously. For example, using small area estimation techniques to deliver higher resolution data for national statistics, or the use of dashboards to monitor the progress of projects like a national census in Rwanda. Projects that deliver these types of new outputs are often popular and particularly impactful for cases where a clear stakeholder has been identified.

We use a variety of open-source methods, tools, and techniques across our mentorship portfolio, which are discussed and set out in the mentoring agreement. We encourage the use of git and GitHub for version control, collaborative coding, sharing code, and project management. The mentor can walk the mentee though git and GitHub if they are unfamiliar. Some countries, such as Vanuatu, have created official GitHub organisation pages for the institute, which now function as a public portfolio of open-source projects maintained by the mentee organisation.

The sustainability of data science

In seeking to develop sustainable data science communities, one important principle has been that mentees, when their projects are finished, should be able to mentor others in their organisation. This “mentor the mentor” approach has been vital, and partners including National Institute of Statistics of Rwanda (NISR) and Vanuatu National Statistics Office (VNSO) have had mentees move on to mentor others in the organisation.

There are several advantages to this approach. First, our ability to run projects increases exponentially. The initial project undertaken with the mentee is often aimed to free up resource (RAP, as described above). As each project is finished, more resource becomes available to undertake more mentoring, which, in turn, frees up further resource. Secondly, by having multiple people trained in data science, we build resilience and sustainability into the system. When one individual is the only competent coder in a group, there is a single point of failure. If they are sick, on annual leave, or leave for another job, it can be difficult to replace them. Having multiple individuals trained in different aspects of coding and data science means we can build resiliency and have the flexibility to have people work on different projects.

Feedback from both mentees and their organisations have been very positive. Former mentees are now leading the implementation of data science projects independently and acting as mentors for others in their organisation. Improvement in capacity and capability for data science takes time. However, it leads to the sustainable embedding of ability and independence for partner countries.

“There were genuine gasps of amazement and spontaneous applause when they described how a report, which would previously have taken six weeks to produce, was now the work of a few seconds.”

The manual processes of producing trade statistics previously took around six weeks for each publication. With these new skills, mentees can now produce the report in just a few seconds. These skills have also been used to tabulate data for the National Housing and Population Census. This was the first time the census data were handled in-house.

Our original three mentees are now mentoring nine others in the organisation to improve routine reporting for the market survey, consumer price index and tourism statistics. In addition, teams in other government departments are keen to learn from VNSO and apply data science tools to their own workflows.

At a recent event launching Vanuatu’s National Housing and Population Census data, all 12 mentees at the VNSO were presented with certificates by the British High Commissioner to Vanuatu. The certificates recognised their hard work in learning about, and promoting, reproducible data science practices across the office and beyond. 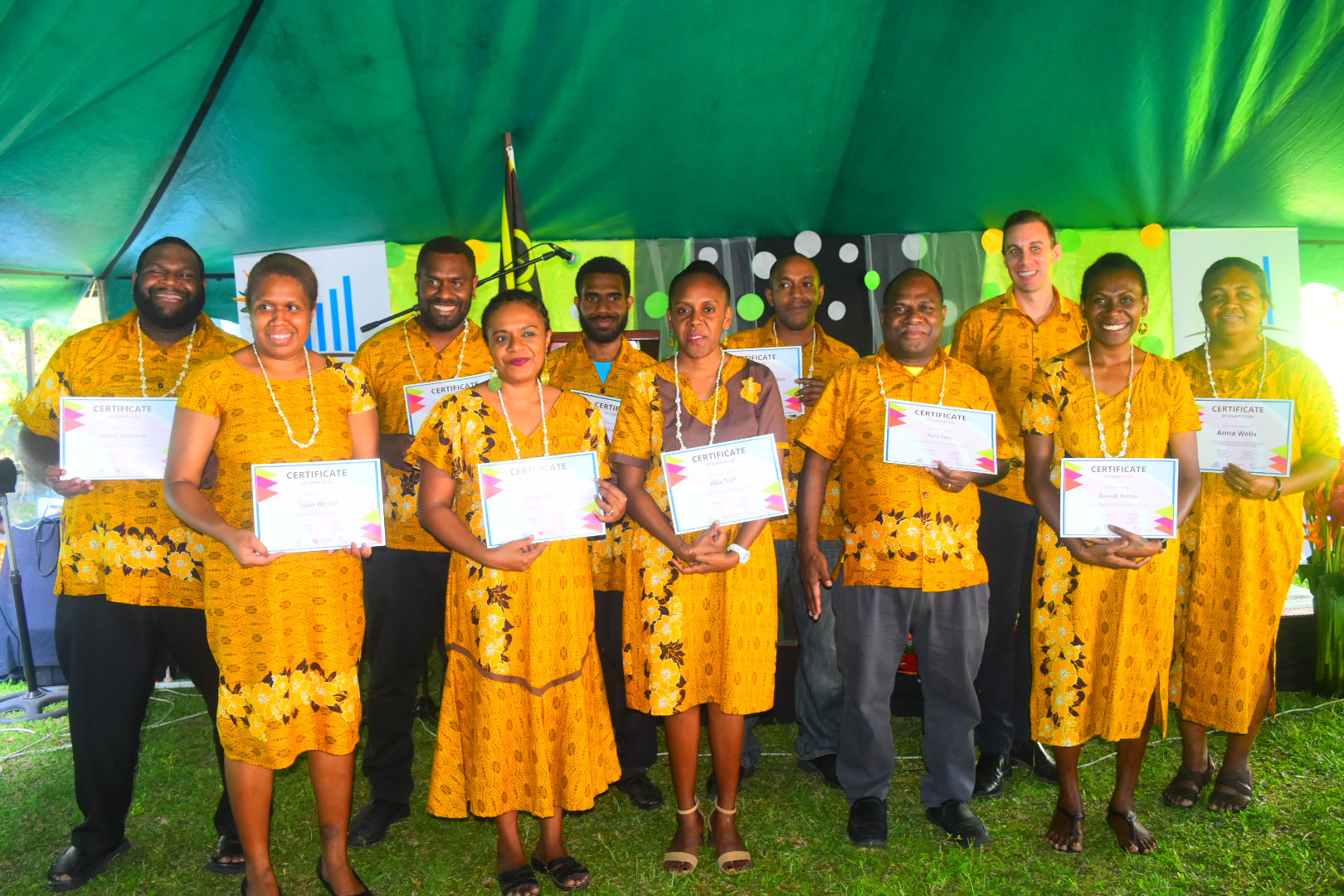 The impact of this work made the Vanuatu national news, and has been recognised and applauded by members of the Vanuatu government:

“The Vanuatu National Statistics Office have been working with the UK’s Data Science Campus for fifteen months. During that time, staff at the VNSO have gained the coding and analytical skills to produce in seconds a report which would previously have taken several weeks. I am proud of the dedication and hard work the VNSO team have put into the project and grateful to the UK government for their support. This partnership has delivered a genuine transfer of skills and capabilities to Vanuatu.” Minister of Finance, Vanuatu Government

Our mentoring now provides support on high-level future directions across the organisation and troubleshooting more tricky data science blockers. Read more on our mentoring programme with the VNSO in their case study published by the United Nations Statistics Division (UNSD) as part of their Collaborative on Use of Administrative Data for Statistics. It states:

Conclusion and next steps

As a model for sustainable international development, mentorship holds great potential. It requires a change in attitude from the mentor and mentee, and a considerable degree of flexibility, but has the potential to deliver significant return on investment. We aim to provide as much support to our partner countries as we can. We hope other organisations will engage in the mentorship model, and we will happily speak about our experience with anyone seeking to set up a similar programme.

If you are interested in mentoring please email Kevin Carolan or Tim Harris.