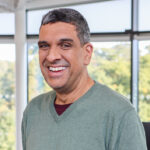 Osama joined the Campus as Director in September 2022. He was previously the Department for Education’s (DfE) Chief Analyst and Chief Scientific Adviser for four and a half years where he was responsible for the provision of analytical and scientific advice to ministers and senior officials.

Before joining DfE, Osama spent fourteen and a half years at the Ministry of Justice (MoJ), joining as an Economic Adviser, before becoming Chief Economist, and later becoming the MoJ’s Chief Analyst and Chief Scientific Adviser for three and a half years.

He also worked at the Civil Aviation Authority for a year on airports regulation, having spent 10 years as a lecturer and senior lecturer in economics at various UK universities.